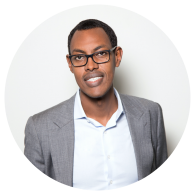 Eight years ago Anthony Kimani, one of my close friends, and I started asking each other how can we become so successful at what we do to the point that we become an integral part of corporate decision making. AK, as I call him, and I met at Filogix Inc. in 2003 where I was a software developer, my first career, and he an analyst with the Corporate Development group.

We were both new to the workforce, having completed our undergraduate degrees just a couple of years prior, and like many other young immigrants with university degrees in their hands, we had no real professional role models or a large network in the corporate world. That didn’t dissuade us though; we started with what we knew: becoming proficient at our current positions.

One successful project led to another and not long after, we were making names for ourselves within Filogix – energetic, reliable, team players with a hunger for learning. The types of employees that every employer loves to have on their payroll. As time went on, our circle of professional friends increased, leading us to build some long lasting friendships. John Donald and Yousry Bissada – former chairman and CEO of Filogix respectively – are two of those people that we met from that period and to this date remain an integral part of our network, sharing knowledge with us and helping us expand our own network.

In 2005, I left Filogix to pursue an MBA degree, embarking on a path that would eventually allow me to change careers from a software developer to a consultant. Twelve months of business immersion program and a hundreds of business cases later (including an international business trip China), I graduated and re-joined the workforce as a Consultant in the Telecommunications (Telco) industry. For the first time in my young career, clients were now relying on me for advice to solve some of their most sensitive business issues. I must admit though, I still had a lot of learning to do. After all, the Telco industry was new to me and, at the same time, offering advice to clients as a service was, also, new to me.

I wasn’t the only one trying to break into a new industry though, AK left Filogix around the same that I did and is now climbing the

corporate ladder in the Real Estate Investment industry. So, it was very natural for us to continue the conversion. I remember one particular phone conversion late on a cold January night; it was around having your boss’ ear. We exchanged ideas on the topic, but neither one of us could at the time come up with a single example of someone who embodied all the qualities that we were discussing. Years later, during President Obama’s 2008 presidential campaign, we learned about David Axelrod who embodied the package that we have been talking about all along, except he was in the political arena.

Two more years would pass before I would get an opportunity to act as a trust advisor, putting five years of planning and practice to work. In January of 2009, I was recruited to help build and launch WIND mobile, one of the new entrants in the Canadian wireless industry. I reported directly to the Larry Austin, Vice President of Customer Operations, and my mandate was to lead the building and operationalization of WIND mobile’s customer facing processes, business rules and policies. For a period of 11 months, I worked closely with different business stakeholders to build and implement a customer-centric contact centre strategy. We launched the company in December of 2009 and shortly after that I was tasked to spearhead the work to stabilize the call centre operations. The hours were insane, but there was never a dull moment. The pressure to deliver and deliver the right solutions brought out the best of us and allowed us to build a very close team.

I built a great rapport with my boss ( I wrote a blog about his qualities in May 2011) within the first few weeks of being hired – after all, there were only two of us in the Customer Operations (COPS) department – and I remember vividly the day my boss signalled that I have his full support when it comes to making decisions for the COPS department. The two of us were in a boardroom full of WIND mobile business stakeholders and Accenture consultants conducting a requirement gathering session for our CRM, Billing and Ordering system(s) when my boss got up from his seat to leave and announced that “Liban will represent me and the COPS department in all aspects of the requirement gathering, design and implementation of the systems. He knows where to find me if he needs any help and he has my undivided attention.” That spoke volumes! Here I am few years removed from graduate school and I am the point person for multi-million dollar systems. More importantly, the decisions that I made in these meeting will have lasting implications for the organization and the system users – mainly our call centre agents. This set of responsibilities gave me extra motivation to work even harder and the pride that I took in my work was evident. I was part of a team that was building a company from the ground up and this was a prime opportunity for me to combine both my academic and professional experience – an opportunity that not many people get, period.

The system implementation phase lead to developing a training curriculum for the 800+ Call Centre and Retail Agents that we hired, and shortly after, we were launching a brand new wireless company in a hyper competitive, saturated Canadian market. I was so focused on doing the best job that overtime I totally forgot to realize that I became a trust advisor for my boss – pretty much being his go to person for most of COPS strategy implementation work.

As a Deloitte campaign highlighted some years ago, for every figure like Sir Edmund Hillary there is usually a Tenzing Norgay. More recently we’ve seen the long-term partnership of Barrack Obama and his closest political advisor, David Axelrod.

A similar dynamic exists in the professional services environment. To become a trusted advisor, you need to be able to subordinate your own interested and objectives to those of your practitioners. Fundamentally, you need to prove that you are someone to whom practitioners can turn to for solid reliable guidance. Putting yourself in a position where others depend on you for advice is more than just personally gratifying; it’s likely to stand you in good stead when the opportunity for a promotion arises. And with rumblings of economic doomsayers all around, now is an opportune time for the trusted advisor to shine.